Orba 2: Anyone Can Make Cool Music With This Palm-Size Synth 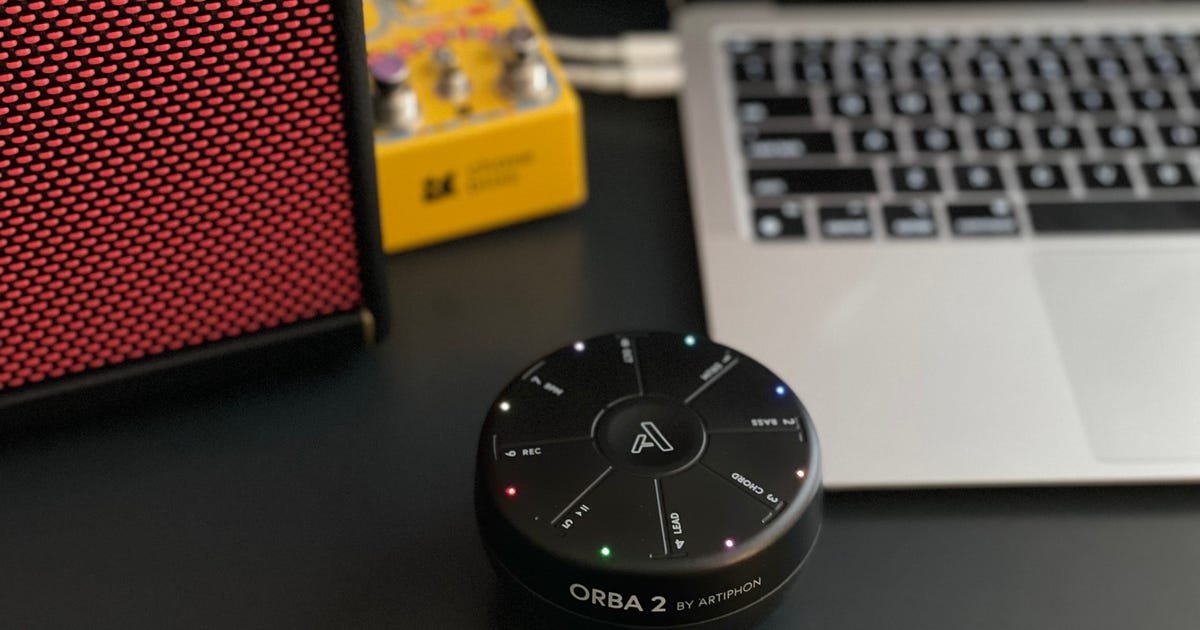 As a casual musician, I like to record original music in my own little home office/studio for my own personal use, and I enjoy experimenting with different ways to create interesting, sometimes unconventional musical compositions. Artiphon’s Orba 2 makes it easy to do exactly that. I’ve had a lot of fun with the tiny synth, and I can envision tons of ways I’ll be able to incorporate it into my studio, because it’s not just a gimmick.

I spoke to Mike Butera, a musician who holds a Ph.D in Sound Studies, and the founder and CEO of Artiphon, a Nashville-based company that designs smart digital instruments. These are “multisensory instruments anyone can play,” according to the company’s website. Butera tells me he wants to make digital music more embodied and tactile, and more accessible to everyday consumers.

The Orba 2 is one of these multisensory instruments: An ergonomically shaped synthesizer you can hold in the palm of your hand. Artiphon sent me an Orba 2, and when I picked it up and started playing around with it for the first time, I couldn’t put it down for hours. I started out by pairing the device with the Orba 2 app on my phone and experimenting with all the instruments and sounds preloaded into the app. Pretty soon I had a sweet-sounding loop arranged with a droning bass and some killer ambient leads over a simple 4/4 rock beat.

The Orba 2 costs $150 and is available to purchase online directly from Artiphon, through Reverb or at retailers like Guitar Center and Sam Ash. It’s easy to pick up and play right out of the box and requires no musical knowledge to start making some really cool-sounding music. This unassuming little instrument is astonishingly versatile and so simple to use, it can make a musician out of anyone — and can make for a unique little gift.

The Orba 2 is the successor to Artiphon’s original Orba device, which launched in 2019. It’s a compact synth, looper and MIDI controller that’s about the size and shape of your average orange, cut in half. The Orba 2 has essentially the same design and interface as the original — with eight multifunctional pads radiating across the top of the device — but with enhanced functionality throughout.

Perhaps the most notable enhancement with the Orba 2 is that you can record literally any sound in the world onto the app and play it on the device. Strum a chord on your guitar, hum a tune, record the sound of a train whistle, snap your fingers — heck, you can dive into the ocean and record whale sounds to sample on your Orba 2. (But if that’s something you’re actually going to do, please just make sure you use a recording device that’s waterproof).

The Orba 2 also adds an “automatic quantize” function which helps automatically line up your musical creation with the beat when looping music. Automatic quantize is a lifesaver if you don’t have perfect rhythm because you don’t have to worry about being precisely in time — the software takes care of that for you.

It also gives you drastically more looping time than its predecessor. The original Orba only allowed for eight-bar loops (up to 30 seconds of looping), whereas the Orba 2 ups that limit to 128 bars, or up to five minutes of looping time. That gives you plenty of time to create and loop an elaborate, comprehensive musical composition consisting of drums, bass, chords (rhythm) and lead.

The device includes a standard 1/8-inch headphone stereo jack and a USB-C port for charging and connecting to your computer or other device (but you can also connect via Bluetooth). It’s equipped with a 3-watt speaker on the bottom, which is adequate if you’re just casually playing around with it in your living room, but you’ll want to plug your headphones into it to get the full effect.

What can you do with the Orba 2?

For such a simple-looking device, the Orba 2 delivers quite a bit more than what you may expect, with certain limitations.

It’s perhaps best used as a musical sketchpad to help you develop and save your musical ideas. That’s where the Orba 2’s portability and expanded looping functionality really come in handy. You can save your looped songs using the accompanying app and build on them later or just play them back. And it’s small enough that you can have it on your desk or easily tuck it away in your jacket pocket and play it on the bus or in the park — whenever and wherever inspiration hits.

Orba 2’s more than 100 presets run the gamut of musical styles, including anything from traditional synths, bass guitars, piano, violins and acoustic drums to video game sounds, beatboxing, hand drums, vinyl scratches and meditative, ambient sounds. Some presets across modes share the same in-app artwork, meaning that they sound good when played together. One of my favorite presets across modes is called 1981, which can deliver some really nice Stranger Things vibes. Another preset I like is called Ambeeant, which is perfect if you want to create a composition that’s supremely chilled-out and relaxing — like a smooth late-night groove, or something you’d expect to hear in a dimly lit shisha lounge.

You can even create your own presets by recording a sound or developing an instrument from scratch using the separate OrbaSynth app, which you can download from Artiphon. Recording a sound is easy using the mobile or desktop apps, but exporting the sound to use on your Orba 2 requires you to connect the Orba to your phone or computer with a USB cable — which isn’t a particularly convenient solution if you’re out and about and want to record something and immediately play it on the Orba. However, you can save your recordings to export later if you record a sound on your phone and you don’t have your Orba or a cable with you.

One of the things I like the most about the Orba 2 is its responsive gesture controls. The pads on top are touch-sensitive and respond nicely to how hard you tap them. You can also hold your finger on a pad to let a note or crash cymbal to ring out, for example. Or radiate your finger inward or outward to add a bit of vibrato or control things like pitch or volume. Other gestures include spin, bump, move, shake and tilt — all of which can help you augment the notes you’re playing and make some really cool sounds.

I also like how Artiphon really does a good job of making the Orba 2 more accessible to nonmusicians by programming the lead presets to play the pentatonic scale. This makes it easy to create lead parts that fit melodically with your song no matter what note you hit.

“The reason we did that is so you could build up a little beat and then take a solo on top, and whatever you press, it’s going to sound good,” Adam McHeffey, Artiphon’s chief marketing officer, told me in an interview. “It’s all about immediacy and just having fun as you play. It’s not about dumbing anything down. It’s just about approachability and just really taking your mind off of it and just having fun.”

If you want to get the most out of the Orba 2, you can use it as a MIDI controller and hook it up to a digital audio workstation like GarageBand, Ableton Live, Logic Pro, Pro Tools and Cubase. I connected my Orba 2 up to GarageBand and that’s where the full potential of this little device really opened up for me in terms of the different kinds of sounds and compositions you can create. I was able to export songs from my Orba 2 into GarageBand, but only as a single track. There doesn’t seem to be a way to export individual tracks. So the best way to leverage GarageBand or any other DAW software with Orba 2 is to start from scratch and create directly within your DAW.

Fun, but not without flaws

Artiphon has a great thing going with the Orba 2, but there are a few inherent drawbacks as well as some room for improvement. For one, while changing octaves is simple and can be done on the Orba 2 itself, there are only eight keys to play with, which makes accessing a broader range of notes considerably less seamless than if you were playing a traditional synthesizer. It’s a necessary but unfortunate tradeoff for the Orba 2’s compact size.

I also found the main Orba 2 app to be rather buggy overall on both mobile and desktop. It crashed often, especially when I was saving songs and trying to load saved songs onto the Orba, which was frustrating. The apps also lost connection with my Orba at random intervals, so I found myself having to reconnect or re-pair it with my phone and MacBook more often than I would have liked. Another thing I found frustrating was that I often couldn’t adjust the volume of individual instruments in my loops, despite the app showing me the option to do so. At times I wished that I could lower the volume a bit on a booming drum beat I created to let the subtler elements of my composition shine — alas, most of the time, the volume wouldn’t budge from 78% no matter what I tried. This put a real damper on my efforts to mix my compositions into something that sounded the way I wanted them to sound. The software has a ton of potential, so hopefully these little quirks get resolved in future updates.

The Orba 2 has added some excellent and useful features that give it a major leg up over the original Orba, but one feature I hope may be available in future firmware updates is the ability to layer multiple different presets from each individual mode on top of one another. For example, it would be helpful to be able to layer multiple different lead presets on top of one another in a single looped composition — say, if you wanted to have a lead guitar part, but also a piano lead or violin lead. That would give you the ability to add some cool dynamics to your songs. Currently, if you already have a lead part looped and you want to change the lead instrument to something else, the originally looped part will change to any other preset you select. Sure, you can work around this by running your Orba 2 through your DAW, but it would be nice to have the functionality through the app as well.

Overall, I think the Orba 2 is an excellent little instrument if you’re a casual musician (or even if you have no musical background at all) and just want an easy way to create cool-sounding music at any place or any time. But professional musicians will probably want something with a little more depth and range.

The Orba 2 is unique, and it’s great for experimentation with a virtually unlimited scope of sonic possibilities in the palm of your hand. It’s a worthy addition to your home studio and can help add some impressive dynamics to your music. It’s an awesome tool for coming up with new musical ideas on the fly, wherever you are. And it’s just plain fun. If any of that sounds good to you, then yes, Orba 2 is worth it and you should give it a shot.